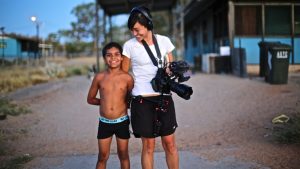 Ten-year-old Dujuan is an Arrernte and Garrwa boy, an Angangkere (child-healer), a hunter, and a speaker of two Aboriginal languages. Dujuan is featured in the documentary, In My Blood It Runs, which is all about him, his family, and his community struggling to maintain their culture and wellbeing amidst a flood of western/white systems. In the film, Dujuan is ‘failing’ in school. Or you might say the western schooling system is failing him. With little space in the western system for Dujuan’s language and culture, his grandmother is fighting to give him a strong Arrernte education along with his western education at school. This is to protect Dujuan from becoming another statistic in juvenile detention or the child protection system. In the film, we walk with him as he finds his place in this world but also a space to dream, imagine and hope for his future self. Despite his disengagement with Western systems, Dujuan understands his culture and thrives when his connection to that is strong. ‘If you go out bush each week you learn how to control your anger and control your life’
– Dujuan, age 10, In My Blood It Runs

He says that he feels strong when he is learning from his Elders and wants to attend an Aboriginal-run school. He also understands that Aboriginal kids are mistreated in juvenile detention, and are much more likely to be locked up than white kids (Family Matters Report 2019 https://bit.ly/3eYXdBW).
Dujuan sees the connections between colonization, genocide, the white Australian educations system, the child protection system, the juvenile detention system and the welfare system. He understands the trauma he has inherited from his ancestors. In September 2019, Dujuan stood up and spoke about these things at the United Nations Human Rights Council in Geneva.
‘I am cheeky but no kid should be in jail, the welfare also needs to be changed. My great-grandmother was taken from her family in the Stolen Generation. My other great-grandmother was hidden away. That story runs through my blood, pipes all the way up to my brain… But I was lucky because of my family. They know I am smart. They love me. They found a way to keep me safe. I am alright now, but lots of kids aren’t so lucky. I think they should stop taking Aboriginal kids away from their parents – that’s wrong.’
– Dujuan, aged 12, addressing the UN 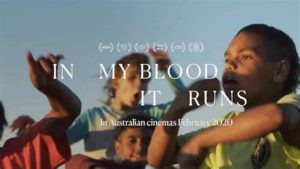 Watch In My Blood It Runs free on iView until 4 August here: https://iview.abc.net.au/show/in-my-blood-it-runs

Read more about Dujuan and In My Blood It Runs here: https://inmyblooditruns.com/